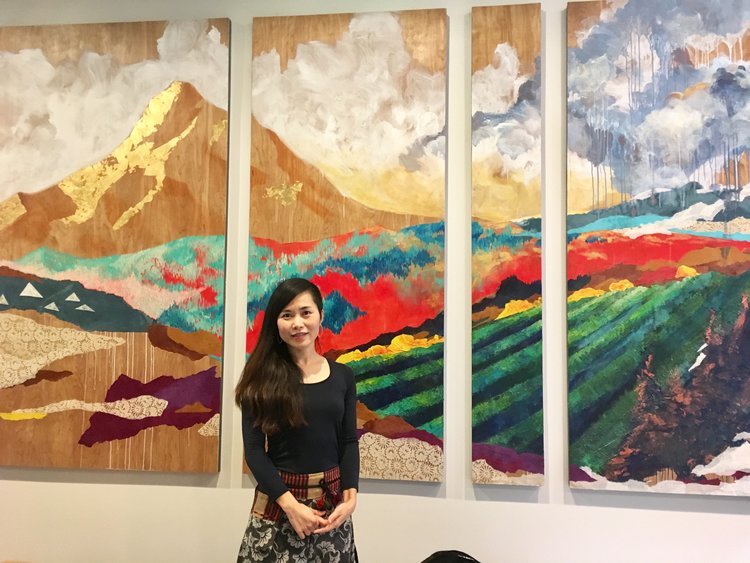 If you have been to or have read about the Pamela Peck Discovery Space at Yew Chung College of Early Childhood Education (YCCECE), you probably have seen these photos: The amazing space does not just appear on its own. In fact, it is Haruka Ostley, our former Artist-in-Residence who initiated and contributed to these fantastic designs! After living in the US for four years, they were then invited back to Yew Chung to do several short-term projects which later on extended to designing the children’s Discovery Space at YCCECE. Along with other educational experts and architectural experts, Haruka organised and contributed to the layout, the interior design and the murals throughout the space. “The process was long but fun!” said Haruka. When we asked Haruka about where she got all those ideas from, Haruka proudly told us that “My primary inspirations are my sons!” Being a mother of a seven-year-old and a three-year-old, she got to observe and think in a children’s perspective. Following their trails, she had the chance to visit many playgrounds, libraries and museums around the town, and most importantly, through observing how her kids communicatedand how they played, she got an inspiration and it fits perfectly to Yew Chung’s vision of play-based learning! However, since the Discovery Space is such a big project, Haruka told us that the process wasn’t easy. It all started as sketches and visual drawings on a piece of paper, as well as inspirations from the Portland Children’s Museum and communicating back and forth with the Yew Chung educators and the architecture team. While achieving an awesome design and cool furniture, it also needs to be fun for kids to play in, explore and feel safe at the same time. The final result of the YCCECE Pamela Peck Discovery Space is truly phenomenal; Haruka herself was very pleased and happy with the result. But at the same time, Haruka shared with us that she feels like the Discovery Space is only a beginning of a frame work, “There is so much to develop throughout the following years with teachers, staff and most importantly, with the children! After seeing children playing in the Discovery Space, we already discovered things we want to add to it.” Kids are filled with unlimited imaginations and this is how it should be. “There is no learning if the space is completely done and filled with set in stone activities!” said Haruka. Being an artist and an educator, Haruka showed us the bond between art and education, and demonstrated to us the unlimited possibilities in education and how art bringsus all together. The YCCECE Pamela Peck Discovery Space is only the beginning! The fun, the creativity, the unlimited imagination and the education doesn’t just stop here. Education and learning should never only be about how much books you read or how good you achieve in an exam. The future lands on our children’s hand, so don’t be afraid to have them dream, create and build their own future in the YCCECE Pamela Peck Discovery Space!

Facts about the Discovery Space:

The YCCECE Pamela Peck Discovery Space is a haven with 14 different sections where children and their significant adults can enjoy time together, building quality relationships. This innovation and stimulating learning space is designed to keep childrenat the centre, providing childrenwith opportunitiesto explore their curiosities, wonders and imagination.

This unique space is open to public fromTuesday to Saturday with twosessions each day from 9 am – 4 pm at HK$ 80 per visit.

Join us on 13 October 2019 at 3pm for a good time and networking with fellow alumni!

Yew Chung founded one of the first kindergartens in Hong Kong some 85 years ago, pioneering what were then the radical concepts of Early Childhood Education (ECE).

It was a pleasure to meet our young alumni from YWIES Yantai. Brian Bang began his journey with us 10 years ago. With pride and confidence, he has now taken his first step of the next adventure!